It is one of football’s super stadiums.

It’s huge, it’s iconic, and it just has to be visited.

It is the San Siro in Milan. 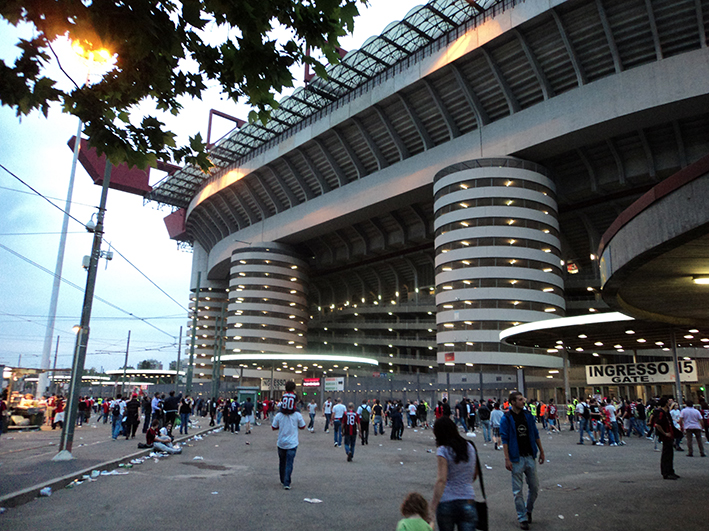 The San Siro isn’t actually the stadium’s official name. San Siro is the name of the district the ground is located in. AC Milan and Internazionale are residents of Stadio Giuseppe Meazza, named after the Italian World Cup winner of the 1930s who played for Inter and, briefly, Milan. However, it’s known throughout the world as San Siro.

And that fame comes from its size, its construction – and helped in no small way by the success of the two clubs that call it home.

Work on the stadium began 90 years ago although the stadium you now see really came to fruition in 1990 ahead of the World Cup finals when it hosted six games. Inside the previous two tier arena gained an extra level of seating on three sides – extending the fourth would entail buying land from the Ippodromo horse racing track next door.

Outside 11 concrete towers were constructed, walkways and stairwells to take the fans up to the dizzy heights of the third tier. Four of them supported the new roof – the distinctive red girders stick out of the top.

Those renovations saw the stadium become all seater. Back in 1990 this gigantic stadium held 85,000 – now new seats have replaced the ageing ones and that capacity has been trimmed back to a still impressive 80,018. 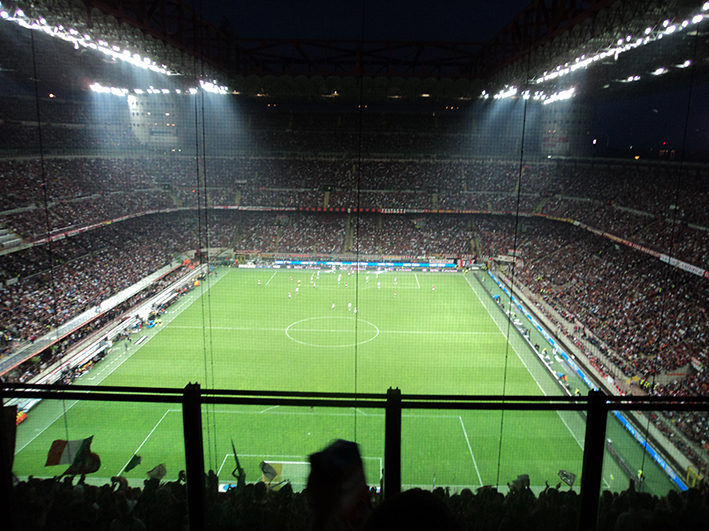 I took in a match from the upper level – and it’s an experience. You will find yourself peering down to the pitch through perspex glass and the occasional smoke flares. If you want to have a better view then a seat on the second tier is a better bet.

Fans of AC Milan will be the first to admit they have not had too much success in the past few years. But they can look back at a European history that other Italian clubs can only dream of.

In 2007 they lined up in Athens against Liverpool in the Champions League Final for the second time in two years. In 2005 they let a 3-0 lead slip and lost. There was to be no repeat – this time two goals from Filippo Inzaghi won them a seventh European Cup.

The first one came back in 1963, the first time an Italian side had won it, but the really successful period was a quarter of a century ago when they lifted the trophy in 1989, 1990 and 1994. This puts them second in the all-time list, behind Real Madrid.

Their fan base traditionally comes from the city’s working class community.

Download a free guide to AC Milan at EventGuides.Com

Internazionale may not have won the European Cup as many times – a mere three – but they hold a few records of their own. They are the only club never to have been relegated from Serie A. Between 2006 and 2010 under the guidance of Roberto Mancini and then Jose Mourinho they won the Scudetto five years in a row, equalling the all time record. In that final season Jose won Serie A, Coppa Italia and Champions League, an historic treble no other Italian side had achieved.

Inter’s fan base has been historically seen as being drawn from the middle classes. The Boys San ultras gather every other week on the Curva Nord of the San Siro where banners and flags are unfurled.

The main rivalry will always be AC Milan. However, Inter’s fans also eagerly await the date of the Derby d’Italia when they face long-time Serie A opponents Juventus. 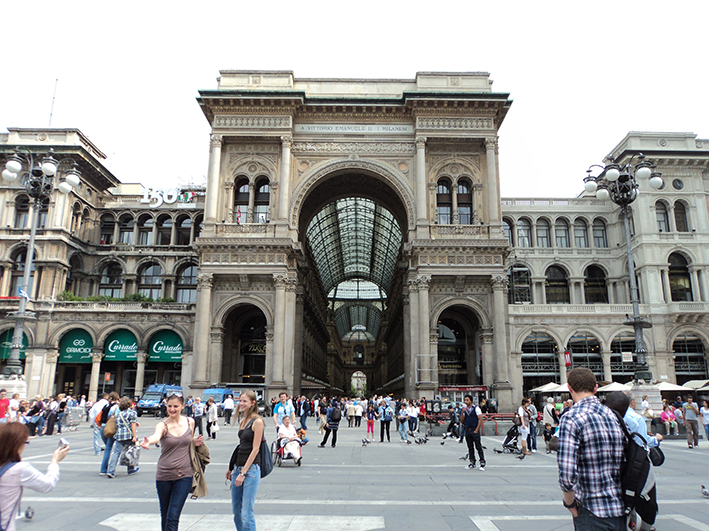 Before going to Milan I asked people who had made the trip before me. The common theme was ‘awesome stadium, not the best footballing city’. And I guess this verdict on Milan mirrored my preconceptions.

My trip there did dispel that myth. True, it is classical and many of the outlets close to the Duomo are strictly window shopping affairs for the more affluent locals and foreign tourists. But it is a beautiful place, it is not as expensive as I feared if you stay off the tourist trail – and it is in football-mad Italy of course!

Your starting point for Milan is at the Duomo. This cathedral is stunning from the outside. There are various charges to see more and go up to the terraces – visit www.duomomilano.it for more details. You pick up tickets from a booking office towards the back of the Duomo, and note it’s slightly cheaper – with shorter queues – if you decide to use the stairs rather than take the lift.

A short walk away is Piazza de la Scala, home of the La Scala opera house. Now to those in the opera know, this is the home of opera. So if opera is your thing this is where you want to see a performance one day. Although it’s grand enough to view simply from the outside and there’s a small museum next door.

The stroll from the Duomo to La Scala takes you through Galleria Vittorio Emanuele II, Italy’s first and most famous shopping arcade.  The glorious interior, from floor to ceiling, are as big an attraction as the items in the stores themselves.

This is the very heart of Milan, host to dozens of galleries and museums. They include Leonardo de Vinci’s The Last Supper, one of the world’s most famous paintings, which can be found at Santa Maria dell Grazie. 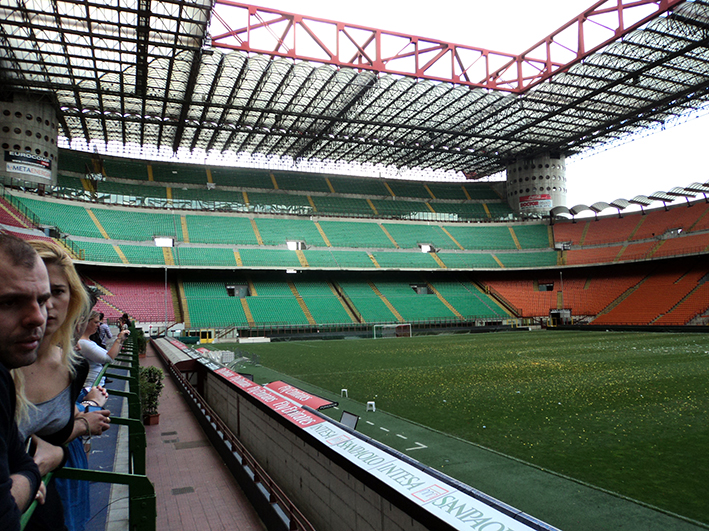 I would recommend you take at least one tour – the San Siro tour.  Tours last an hour and take in the usual parts of the ground. What I found interesting, and hadn’t occurred to me before, was that it has three dressing rooms – one for the visitors, and one for each of the home sides. The home rooms are both the same size – but totally different in style and layout.

The museum and tour costs 17 euros for adults, 12 euros for concessions, bookable in advance or simply turn up on the day, you will find it at entrance (Ingresso) 8. It is open daily, including Sunday, from 9.30am, but note that when there are evening kick offs the tour is often only available until noon. If it is a rare afternoon kick off there may be no tours that day.

See a match in Milan! Book it at Nickes.Com!